This is the first in an occasional series called “Tips from a J-Student.” Posts will focus on ways journalism students can better prepare themselves for jobs, internships and other opportunities.

I know I’ve said this before in some form or another, but (in my Mel Brooks voice):

About 50 newspaper and other media professionals gathered at the University of Miami’s School of Communication on Saturday for a day of online and multimedia training sessions, sponsored by the Florida Society of Newspaper Editors and Florida Press Association.

For the second consecutive year, Matthew Bunch (@matthewsbunch) and I volunteered for the event. Deborah Acosta (@deborahacosta) a first-year graduate student, also volunteered.

Well, there was free breakfast and lunch. More importantly, it was an opportunity to see old friends, meet new people and learn something (sessions were also free for volunteers).

For example, I met University of Florida journalism professor Dave Stanton (@gotoPlanB) after months of hearing about him from former students and Orlando Sentinel senior producer Danny Sanchez (@DannySanchez) after following each on Twitter for awhile.

As for learning something new, I was able to attend a session in each of the three time slots (more details). It just so happened that all of them were led by Miami Herald journalists:

I wish I could have attended all the workshops, but I picked the ones where I thought I would learn the most.

So what good does this do you?

Find out if your school hosts any professional development events. Most UM journalism students have no idea this opportunity – though limited to a few volunteers – exists at all.

If there’s not such an event, see what you can do to lobby for workshops or some other opportunity to network and learn (somewhat related: a shameless plug for Sean Blanda‘s efforts to bring BarCamp NewsInnovation to Philadelphia).

But the overall lesson is to take advantage of any available opportunity to improve your skill set, make new connections and continue relationships. And, if that opportunity doesn’t exist, try to make it happen.

Upcoming opportunity: From Jan. 3 to 10, Knight Char in Visual Journalism Rich Beckman will host his annual Beyond Bootcamp workshops at UM for the first time.

Students have the (paid) opportunity to assistant in one of the three-day sessions. I’ll be helping out with the video narratives sessions, Jan. 7 to 10. Of course, I plan to blog about this event.

Looking forward: Several upcoming posts in this series will related to applying for summer internships. Although it’s too late for many summer opportunities, I hope these posts will help students applying in the spring and beyond.

Weigh in: Have you found any similar training or networking opportunities at your school? If not, what kind would you like to see? 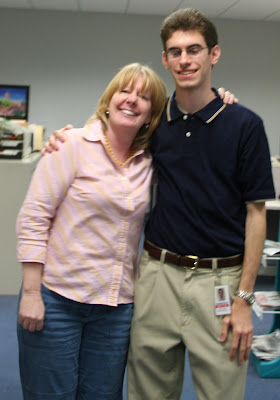 Friday was my last day as a Miami Herald intern. I’ve written several posts about the experience (links below), but now I would to provide a more comprehensive look.

From the first day, my colleagues were very friendly and welcoming. There are too many people to thank individually and I don’t want to leave anyone out, so I’ll just say: THANK YOU!

Check out this photo of my editor Carol Jertson (left) and me (right, with my eyes closed).

Expectations
In short, the internship surpassed my expectations. I knew that I would have the opportunity to cover a wide range of topics as a general assignment reporter, but the quality of that experience was simply amazing â€“ and tons of fun.

I wrote more than 30 stories for print/online, posted more than a dozen breaking news stories online (almost all of which went into print as briefs), contributed to several other stories and even anchored a breaking news story (this involves taking feeds from a reporter in the field and updating a story online).

I was particularly pleased with the amount of video work I was able to do, shooting and producing a total of seven videos (three for my stories, two for another intern’s stories and two for a business writer’s column). I have also shot video to go with an in-depth piece I will continue to work on after the internship.

Ch-ch-ch-ch-changes
The newsroom has gone through some very significant changes since I began three months ago, especially where I worked â€“ the main Broward County office in the city of Pembroke Pines.

Like other news organizations, Miami Herald Media Company had its share of cutbacks this summer. About one month into my internship, the publisher announced that 250 full-time employees would be cut by voluntary and involuntary buyouts, which is about 17 percent of the staff. This news coincided with cutbacks across the board at McClatchy papers (more on that here).

On a positive note, I also witnessed plans to reorganize the newsroom and to redesign the Web site.

Reflecting on all this, I wrote the following on internal discussion board before I left Friday evening. I added the bracketed parts to explain a few things: 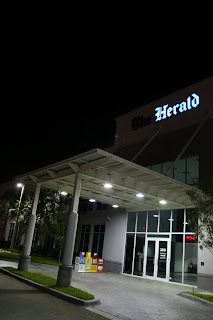 Intern’s last day: After 12 weeks, my stint as a metro GA [general assignment reporter] in Pines ends today. I’ve learned a lot, everything from sharpening my reporting skills to shooting and editing better videos.

I’ve also seen a great deal of change during my short time here. Some of those changes involved hard times. Hard times that have resulted in different pieces of advice for after I graduate in May: Go to law school. Go to med school. Don’t go into newspapers.

As for law school, Herald alumnus and current UM professor Sam Terilli has shown me that lawyers can be good people. Med school? I’m not a big fan of blood, so cross that off the list. Granted, those two bits of advice were usually jokes. But the third…not so much.

Nevertheless, I leave with a stronger love of journalism. I’m not naive (though I will admit to not knowing how to do the “i” for that in Coyote [system where we write stories]). I’ve been reading since high school about what’s going on in the industry â€“ and my time here has shown me some of those changes firsthand.

I’m hopeful that newspapers will find a way to innovate in terms of content and advertising. I don’t know when, or how, but I’m hopeful. I’m also realistic enough to know some won’t adapt and some might, but still fall prey to whatever circumstances.

To everyone I’ve met, thank you for everything and please keep in touch: greglinch[at]gmail.com or www.greglinch.com. I won’t be far away at school (I go to the University of Miami), so I’ll be sure to visit.

The end of my internship is not really “The End” because I plan to continue to write stories and shoot/edit videos as a freelancer.

But I did have to say goodbye to my desk (below) and ID badge. 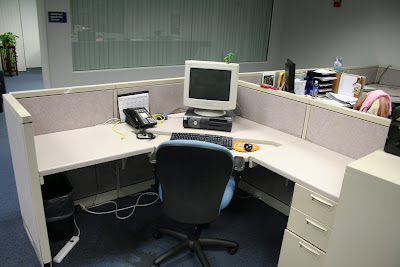 What’s next: In addition to freelancing during my senior year, I will be the editor at large for multimedia and online at The Miami Hurricane student newspaper.

As of now, this is mostly an advisory role with certain hands-on elements, such as overseeing the launch of the new site, currently in beta. But it’s a new position, so I’m sure the role will develop more in the coming months.

Check out my other internship-related posts:

End-of-internship posts by other student journalists:

This was my seventh video for The Miami Herald and was definitely one of the most fun to do. It went with fellow metro intern Ely Portillo’s story about a small local seafood and wings joint, Tarks of Dania.

Tarks’ cook Lenny, just being himself, provided a lot of great material. Check it out:

I’m shooting a video for business columnist Cindy Goodman on Thursday morning and I’m planning to do another to go with the in-depth piece I’m working on, so I should have at least two more videos before the internship ends. Most of my time lately has been devoted to that in-depth piece, which is still in progress.

My video adventures continue at The Miami Herald. I really like the most recent one, “Seniors fight Parkinson’s with boxing.” I shot some stills along with the video (it’s always good to carry an SLR around). My photo of the Victor and Damaris Guzman not only ran in print on 2B but was also the main display online the morning the story ran (see left).

Looking forward, I shot video and stills for a feature about a local restaurant on Friday. As always, I will post that video here.

Another intern, Ely Portillo, is writing the feature and asked me to join him for the multimedia. We previously worked together on the Parkinson’s story and I think we make a pretty nifty reporting duo.

Ely’s Parkinson story was great. We got a lot of good feedback on both, even being complimented in the morning news meeting after the story and video ran. We weren’t in on the meeting, but about heard it from someone who was.

I’m still writing breaking news, daily news and feature stories for print and online for my internship, but I’m devoting more and more time to multimedia work and a long-term story project.

A final note on video: I’ve been invited to join a new Miami Herald video task force, an offer I enthusiastically embraced. Giddy may not be the right word, but I’m pretty excited.

My second video for The Miami Herald went online yesterday with a story I wrote. The piece is about a camp group that learned to cook ice cream and spring rolls from chefs at a Fort Lauderdale restaurant.

Read the story here — the video is below, as well as embedded in the story page.

View the video on The Herald’s site.

I’m still producing a steady mix of news and feature stories for the Broward metro section, plus working on a couple longer term projects for my internship.

One of those projects will likely take a few more weeks. For another project, I went out today with Cindy Goodman (see her blog) to shoot a video to go with her business column on Wednesday. I’ll be sure to post a link to her column and embed the video here.

I also took some photos, so hopefully one will run. That would be my second published photo of the summer (I had a bunch of photos published in 2005 when I freelanced for Broward Neighbors, which is like community news).